Day 1; Nairobi-Samburu
Depart Nairobi in the morning for Samburu National reserve crossing the Equator and driving through changing terrain to the rugged semi-desert region in the northern Kenya. Though harsh, it is blessed with species rarely found elsewhere. Arrive in time for lunch at lodge. Afternoon game drive to search for the stars of Samburu. Dinner and overnight at a Tented camp.

Day 2; Samburu
Full day in Samburu with game drives .Search for the rare liver red reticulated giraffe, Grevy’s Zebra, Beisa Oryx, Blue flanked Somali Ostrich, Vulturine Guinea Fowl, Longneck Gerenuk. See braving lions on the grass, Cheetah, Leopards among plenty of other plains game. (optional visits to Samburu villages). All meals and overnight at a Tented camp.
Day 3; Treetops
Breakfast at a lodge and drive to the shoulders of Mt. Kenya arriving at the Outspan Golf & Country Club for lunch. After lunch transfer by lodge vehicle to the Treetops Lodge where from the lodge balcony you view game that often visit the floodlit waterhole and saltlick–e.g. elephants, rhino, buffalo and giant forest hog. Dinner and overnight at a Tented camp.
Day 4; Lake Nakuru National Park
Depart Treetops lodge for breakfast at Outspan Golf & Country Club and depart for Lake Nakuru via Thompson falls arriving in time for lunch, afternoon game drive at the Pink lake referred so for it’s thousands of pink flamingos and other bird-life-it’s a Bird watchers paradise. It has a surprisingly number of animals, all the “big five” except the elephant can be seen here, Dinner and overnight at a Tented camp.
Day 5; Lake Naivasha
Breakfast and depart for Lake Naivasha in the Great Rift Valley. Lake Naivasha is one of the gems in a necklace of Rift Valley lakes, has a variety of bird life and hippo colonies. Lunch, Dinner and overnight at a Tented camp.
Day 6; Maasai Mara
Morning game viewing at the Park which is a rhino sanctuary and a bird watchers paradise, look for warthogs and water bucks as you leave the Park. Breakfast at the lodge and depart for Maasai Mara crossing the loita plains, see red clad Maasai warriors tend their multi-colored herds amongst plains game. Arrive Mara in time for lunch. Game viewing enroute to Mara Sarova camp for lunch. Afternoon game drive. Dinner and overnight at a Tented camp.
Day 7.Maasai Mara National Reserve.
This is the day your dreams about maasai Mara comes true. Breakfast at lodge and leave with picnic lunches for a full day game drive inside the Park. Search for wild game black manned lion for which Mara is famous for, cheetah, buffalo, wildebeest, zebra, leopard, grants gazelle are quite common, even the rare rhino might come out of the thicket for you, hyenas are plentiful, Extend your drive to the hippo point where schools of hippo submerge on the approach of vehicles only to surface seconds later to shot and gamble their displeasure as the crocodiles sunbathe on the river banks mouths agape. Between meals there is optional visit to the maasai villages for an insight to their culture if clients so wish. Meals and overnight at a Tented camp.
Day 8; Nairobi
Morning game drive to savor the beauty of the park, breakfast at lodge and depart for Nairobi arriving at around 1400 hours.

Along with 7 amazing nights in Samburu, we also have a wide range of safari tours in Kenya! 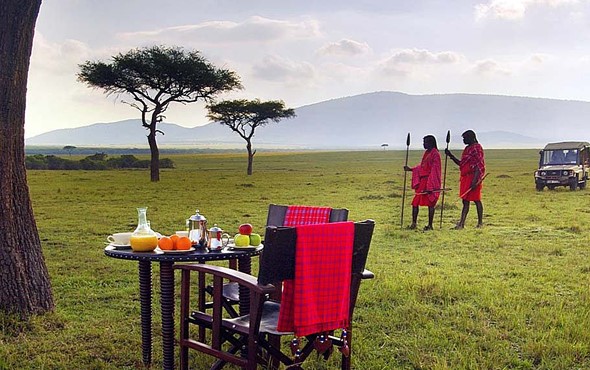