Selous Game Reserve is Africa's largest game reserve and one of our favourite game viewing areas in Africa. It really is a hidden gem! It’s much quieter than the Northern parks, the rivers and lakes of the Selous are the lifeblood to a park that hosts phenomenal volumes of game including Africa's largest elephant and wild dog populations and probably it's largest buffalo, hippo, crocodile and lion prides.

With 45,000 square kilometers, this is not only Africa’s biggest game reserve but it is the oldest. It is also the least accessible and the least known. Consisting of woodlands with grassy flood plains and dense forest patches, it provides a home for large herds of elephant, rhino, buffalo, lion, leopard and hippo, where in fact the elephant herds are the largest in Africa. Containing some of the area is accentuated by the Rufuji river system which flows through its centre making effecting communication impossible. July to October could be pin-pointed as the best time of year to visit the Selous, as it is a classic dry season destination. The wildlife congregate at the water sources and put on a great game-viewing performance.

Selous Game Reserve has the largest number of elephants out of all the reserved wildlife areas in the country. The park offers a variety of environments ranging from hot volcanic springs, dense thickets, and open wooded grasslands. This diversity is also home a broad range of game, including buffalo, gnu, hartebeest, Greater kudu, sable, warthog and zebra. Also lion, hippo, spotted hyena and black rhino are spotted, while African wild dog and cheetah are sometimes seen. Selous also boasts over 350 species of bird and reptiles such as crocodiles and various snakes and lizards. Walking is permitted (with an armed ranger). Selous is one of the more exclusive areas in Tanzania. Its size and location afford privacy and seclusion from the masses of tourists associated with the more well-known parks such as Ngorongoro and Serengeti. 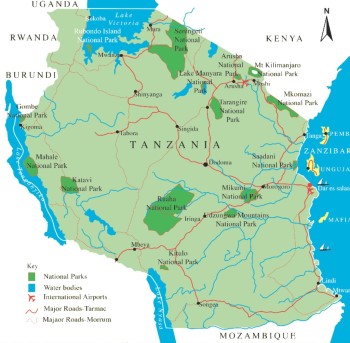