From the sight of fifty million gallons of crystal clear water gushing out of from the under parched lava rock that is the Mzima Springs to the Shetani lava flows, Tsavo West is a beautiful, rugged wilderness. The savannah ecosystem comprises of open grasslands, scrublands, and Acacia woodlands, belts of riverine vegetation and rocky ridges including the Poacher's Lookout where visitors can see the teeming herds in the plains below. Tsavo West offers some of the most magnificent game viewing in the world and attractions include elephant, rhino, Hippos, lions, cheetah, leopards, Buffalos, diverse plant and bird species including the threatened corncrake and near threatened Basra Reed Warbler.

Tsavo West National Park offers a variety of wildlife and birdlife. More than 600 species of birds have been recorded. Animals to be spotted include the leopard, cheetah, buffalo, rhino, elephant, giraffe, zebra, duiker, waterbuck, lion, crocodile, mongoose, warthog, hyrax, dik dik and porcupine. Another attraction is the Ngulia Rhino Sanctuary at the base of Ngulia Hills. The sanctuary is part of the Rhino Ark Programme, which protects Tsavo West's precious population of black rhinos. The Shetani flow, a black lava flow of 8km long, 1.6km wide and 5m deep, is the remains of volcanic eruptions. There is a cave located near the centre of the outflow, which is only a few metres long, but the exit is not accessible as it is too narrow. In the far south western corner of the park is Lake Jipe, which is fed by runoff from Mount Kilimanjaro and the northern Pare mountains. It is a wonderful attraction to visit. 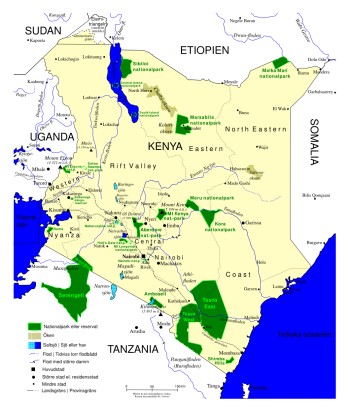