Bwindi Impenetrable National Park lies in southwestern Uganda on the edge of the Rift Valley. Its mist-covered hillsides are blanketed by one of Uganda's oldest and most biologically diverse rainforests, which dates back over 25,000 years and contains almost 400 species of plants. More famously, this “impenetrable forest” also protects an estimated 320 mountain gorillas – roughly half of the world’s population, including several habituated groups, which can be tracked.

This biologically diverse region also provides shelter to a further 120 mammals, including several primate species such as baboons and chimpanzees, as well as elephants and antelopes. There are around 350 species of birds hosted in this forest, including 23 Albertine Rift endemics.

Gorilla Tracking is the park's main tourist attraction. Tourists wishing to track gorillas must first obtain a permit to do so. Seek advice from your local Uganda safari operator on selection of the gorilla permits based on which section of Bwindi you would be visiting. Otherwise gorilla permits are purchased at Uganda Wildlife Authority. Selected gorillas families have been habituated to human presence and the number of visitors is tightly controlled to prevent degradation of the habitat and risks to the gorillas. Gorilla Tracking Safaris generate much revenue for Uganda Wildlife Authority and neighboring communities which is crucial for gorilla conservation. The gorillas seldom react to tourists. There are strict rules for tourists to minimize the risk of diseases passing from them to the gorillas. 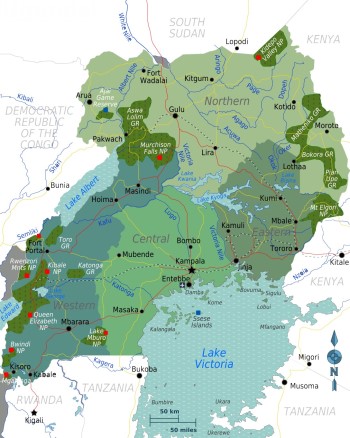