Akagera National Park is located in the north east of Rwanda along the border with Tanzania. It is named after the Akagera River that flows along its eastern boundary and feeds into a labyrinth of lakes of which the largest is Lake Ihema. The rolling hills of Acacia and Brachystegia Woodland coupled with scattered grassland and swamp-fringed lakes along the meandering Akagera watercourse combine to create a park of breathtaking scenic beauty.

Forest fringed lakes, papyrus swamps, savannah plains and rolling highlands combined in a relatively small area make Akagera among the most scenic of savannah reserves. Akagera has exceptional levels of biodiversity, partly due to its position at the confluence of different vegetation zones. The extensive systems of freshwater lakes and associated papyrus swamps form the largest protected wetland in central Africa.

Of the primate family, olive baboons (Papio anubis) and vervet monkeys (Chlorocebus pygerythus) are common, less so is the secretive blue monkey (Cercopithecus mitis) which was thought to have become extinct in Akagera until recently. Bushbabies or Galagos (Galago moholi and Otolemur crassicaudatus) are often seen on night drives. Of the large predators only leopard (Panthera pardus) and hyaena (Crocuta crocuta) can still be found in the park. Although lion once occurred throughout Akagera, the population have been wiped out mostly through poisonings by cattle herders seeking to protect their livestock. A reduction in the prey-base due to heavy poaching would also have contributed to their demise. Smaller predators are still well represented with healthy populations of several mongoose species, viverrid species, serval (Leptailurus serval) and side-striped jackal (Canis adustus). Plans are underway for the reintroduction of lion in 2014, and black rhino in 2015 which will restore Akagera’s ‘Big 5’ status. 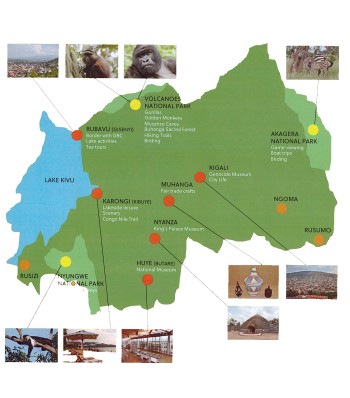